Nearly every WordPress Theme benefits from a dynamic structure of shortcodes. The little piece of code gives one extra control over the layout ,allowing editor to put the structured content whenever needed.

We’re going to present you with a simple, yet powerful way of creating shortcode popup windows which generate the and place the shortcode in the editor. This removes the hassle of having to put everything manually which is error prone.

Prerequisities for the Shortcode popup

First we need to create the shortcode itself. To improve the readability we’ll use the powerful method of output control, which is described in the Use output control with shortcodes WP doin post.

Let’s assume we have a simple shortcode which creates an element with two headings and a short description.

Into the Media Buttons

Now we’ll need to add a button the Media Buttons toolbar and a corresponding input elements that will show up on the button click, we’ll do so with the following two hooks.

The above code seems quite complex due to it’s length. However there’s nothing to worry about as most of the code is the custom CSS and HTML markup to style the overlay. The important thing to bear in mind are the id attributes of the divs and input elements. The former is used for the TinyMCE overlay window as the identificator of what popup to show upon the shortcode clik.
The latter isused by the custom JavaScript which populates the content with values from input elements.

With the code in place will finish with the following.

After clicking the shortcode button we’ll end up with a nice overlay window. When filled it will create the shortcode markup for us. 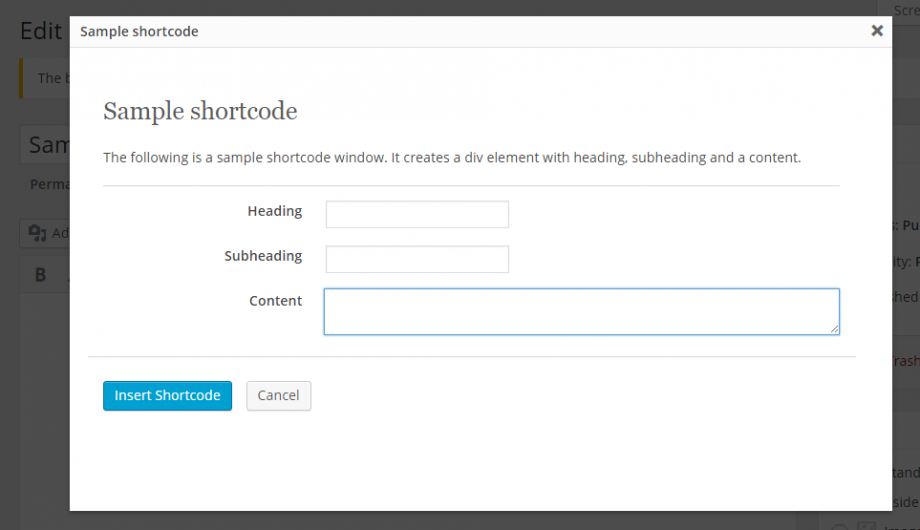 We believe that getting familiar with custom shortcode overlay popups gives one a serious advantage in User Experience. The ones that not provide these and require the end user to place everything manually are hard to manage.

This website uses cookies to improve your experience while you navigate through the website. Out of these, the cookies that are categorized as necessary are stored on your browser as they are essential for the working of basic functionalities of the website. We also use third-party cookies that help us analyze and understand how you use this website. These cookies will be stored in your browser only with your consent. You also have the option to opt-out of these cookies. But opting out of some of these cookies may affect your browsing experience.
Necessary Always Enabled
Necessary cookies are absolutely essential for the website to function properly. This category only includes cookies that ensures basic functionalities and security features of the website. These cookies do not store any personal information.
Non-necessary
Any cookies that may not be particularly necessary for the website to function and is used specifically to collect user personal data via analytics, ads, other embedded contents are termed as non-necessary cookies. It is mandatory to procure user consent prior to running these cookies on your website.
SAVE & ACCEPT